#LetHerSpeak: Amend the laws which prevent sexual assault survivors from telling their story

Tasmanian and NT survivors are now able to self identify in media provided they are over 18, consent to be named in writing, do not reveal another victim's identity, and all proceedings are completed.

In August 2020, the #LetHerSpeak campaign creator, Nina Funnell, and partner organisations revealed that Victoria had recently introduced its own separate victim gag-law prohibiting many rape and sexual assault survivors from self-identifying in media. Nina and the partners have launched a sibling campaign, #LetUsSpeak, to challenge the Victorian legislation. To learn more about that campaign or donate visit: https://au.gofundme.com/f/stop-silencing-survivors 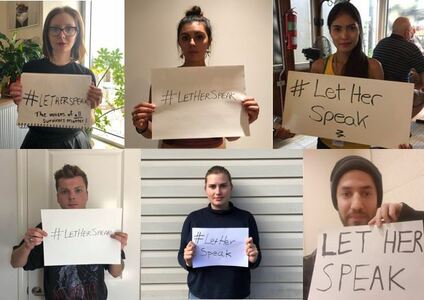 When Jane Doe* was 15 she was groomed and repeatedly sexually molested by her 58-year-old high school maths teacher.

Jane Doe’s teacher went to jail for the crime, but later re-offended by producing child exploitation material, for which he served additional jail time.

Jane Doe has never told her story in full. She wants to, but a law in Tasmania says that no person is allowed to reveal the identity of a sexual assault survivor, even with the survivor's full consent.

The punishment for breaching this law is to be found in contempt of court and any publication which names Jane Doe can be prosecuted and fined.

Nor is this an idle threat. In 2012, a Tasmanian publication was successfully prosecuted and fined $20,000 after publishing the name of a rape survivor, with the survivor's full consent.

We want to change the law so that any survivor who wishes to be named can waive their right to anonymity without them, or the publication which names them, facing penalty.

The voices of sexual assault survivors deserve to be heard. Jane Doe wishes to speak out under her real name to challenge the stigma and break down silences surrounding sexual assault. In the #MeToo era we have seen how powerful it is when victim-survivors chose to waive their right to anonymity in order to shift the shame, and shift the blame.

The laws in Tasmania and the Northern Territory must be amended to say that no person or media outlet is entitled to reveal the identity of a sexual assault survivor, UNLESS that survivor consents to waive their right to anonymity.

“The most empowering thing I ever did following my own assault was to speak out publicly about it. It was an important part of my recovery” said Nina Funnell who has designed the campaign in partnership with End Rape On Campus Australia and Marque Lawyers.

“There is tremendous power in survivors owning their own stories without fear or stigma. It is incredibly disempowering for survivors who want to reclaim ownership of their narrative, to be told that they have no right to speak out about their own abuse”.

"This law protects perpetrators, not victims".

“By silencing Jane Doe- and other survivors- the courts are keeping the stigma and silence around sexual assault in tact”.

Under existing law, survivors have to appeal for a special exemption by the Supreme Court in Tasmania so they can speak. This can cost in excess of $10,000 and there is no guarantee it will be granted. Survivors should not be financially penalised just so they can earn the right to speak.

Please join with us in pushing for urgent law reform.

She deserves to be heard.

Change the law and #LetHerSpeak

*Not her real name

Petition is successful with 8,209 signatures