ETU and AMWU have announced that they have reached agreement to immediately end the dispute with the maintenance workforce at the Abbotsford brewery in Melbourne, Victoria.

As part of the agreement, all picketing workers have been invited to return to work at their previous positions at the Abbotsford brewery on fair and decent union terms and conditions, which provide job security to the workers. All parties agreed to productivity and efficiency improvements that will be implemented at the brewery. CUB and the Unions have mapped out a better approach based on mutual respect, productivity and a shared passion to make the best beers with the best skilled workers.

The ETU and AMWU have called for an immediate end of the ongoing boycott and are encouraging their supporters to return to drinking the full range of CUB beers and ciders.

All parties are pleased to resolve this dispute and to refocus their attention on working together to brew the best beers in Victoria. 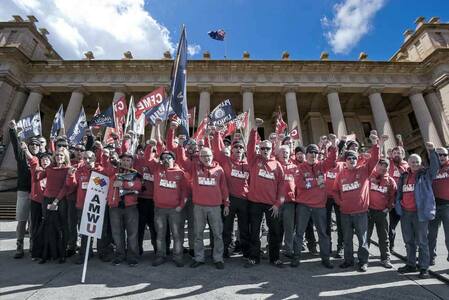 I have learned of the sacking of 55 members of AMWU and ETU at your company's Melbourne brewery, among them members with decades of service and dedicated apprentices.

I support the unions' demand for the immediate reinstatement of the dismissed employees and respect for existing agreements.

Failure to take swift action to remedy this injury to employees who have worked hard to build your brands' reputation will undoubtedly tarnish the image of your company and its new owners following the planned merger of Carlton United's parent company SABMiller with AB InBev.

In an outrageous act of corporate greed, 55 CUB workers were terminated without notice and then offered a take-it-or-leave-it non-union deal with a 65 per cent reduction in monetary entitlements and cuts to most of their hard-won conditions.

It’s shameful that CUB workers are paying a price for being union and doing their job well, while SAB Miller (CUB's parent company) made $4.4 billion in profits this year and is currently part of the biggest ever corporate takeover in the history of the global beer industry.

We need your support to call on CUB to reinstate the workers and end their shameful anti-worker, anti-union tactics.

Petition is successful with 11,731 signatures

Petition is successful with 11,726 signatures